Apex industry body FICCI has said that lower-than-expected growth in manufacturing growth indicates that investment demand remained an area of concern as reflected in the steep decline of capital goods sector.

“The fall in manufacturing growth is indeed disturbing and against our expectations. We were hoping, if not high, some moderate growth in manufacturing in the second quarter of this fiscal which looks difficult now,” said Harshavardhan Neotia, President, FICCI.

“Weak consumer demand and investments continue to shroud the growth of manufacturing and calls for sustained efforts to address the structural issues that impact manufacturing sector,” added Neotia.

The Index of Industrial Production (IIP) contracted 2.4 per cent in July 2016 as against the growth of 2.0 per cent yoy in June and was much lower than Ind-Ra’s expectation of 1.2 per cent. 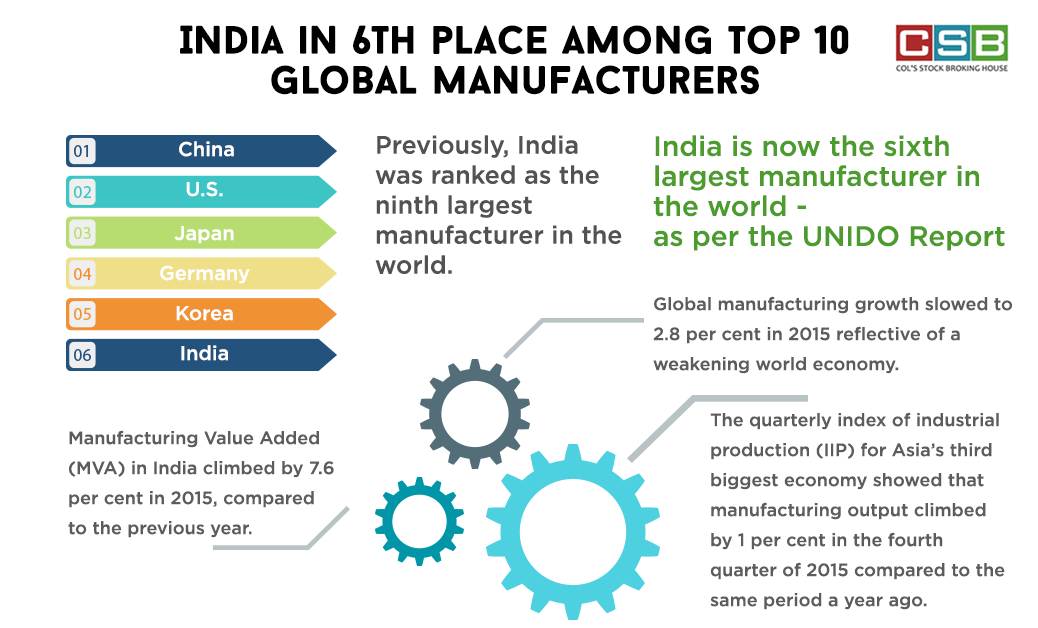 According to a report by United Nations Industrial Development Organization (UNIDO), India has occupied sixth place in a ranking of the world’s top ten manufacturing economics which is topped by Asian powerhouse China.

Previously, India was ranked as the ninth largest manufacturer in the world.

Data from UNIDO’s Yearbook shows that the Manufacturing Value Added (MVA) in India climbed by 7.6 per cent in 2015, compared to the previous year.

“India is now the sixth largest manufacturer in the world”, the UNIDO report said.

The quarterly index of industrial production (IIP) for Asia’s third biggest economy showed that manufacturing output climbed by 1 per cent in the fourth quarter of 2015 compared to the same period a year ago.

Meanwhile, global manufacturing growth slowed to 2.8 per cent in 2015 reflective of a weakening world economy.

“This slowdown could be due to reduced manufacturing growth rates recorded by major developing and emerging economies”, the report added.

After China, which is the world’s biggest manufacturer, the US, Japan, Germany and Korea are ranked second, third, fourth and fifth on the list of the largest global manufacturing countries, with Indonesia in tenth place.

In a bid to bolster India’s manufacturing prowess, the NDA government in 2014 unveiled its flagship ‘Make in India’ program to help make India a global manufacturing and investment hub by easing rules of doing business in the country including accelerating key structural reforms.

Investors, beware of these six events.

The Greek Economy is coming down crashing like nine pins and a recent report by BoFA-ML suggests there are at least 6 event risks investors need to be aware of and prepare in case need be.

India economists, Indranil Sen Gupta and Abhishek Gupta at Bank of America suggests that there would be no immediate resolution of the Greek Crisis with rising Grexit risks.

Here are the six events that BofA-ML lists:

May IIP: BofA-ML estimates that May industrial growth will slow to 2.8 per cent on July 10 from 4.1 per cent in April. The report also suggests that the recovery shoud be back-ended as lending rates take about six months to support growth. They also comprehend GDP (gross domestic product) growth slowly bottoming out to 6 per cent (in the old series) in FY16 from 5.5 per cent in FY15.

June Inflation: BofA-ML pegs consumer price inflation (CPI) at 5.4 per cent, higher than May’s 5 per cent, which will be driven by higher prices of pulses; increase in service tax could raise CPI inflation by around 20 bps (basis points); and fall in petrol deflation to -2.6 per cent in June from -8.9 per cent in May that could impact CPI inflation by 10-15 bps. In this backdrop, they expect the Reserve Bank of India (RBI) cut rates by 50 bps by early 2016 with inflation well on track to its ‘under’-6 per cent January 2016 target.

Monsoons: Let’s face it, monsoons are unpredictable. So even if June runs smoothly, the standard monsoon accounts for only 15.2 % of the seasonal rainfall. So be on your toes, as a clearer picture can only be expected by mid-July according to the report.

Parliament Session: According to BofA, the recent controversies in the political scenario do not send positive signs for a seamless passage of GST or amendments to Land Acquisition Act during the upcoming monsoon session of Parliament beginning 26 July. Currently, the market is over rating the contribution of either legislation to grow.

BofA comments, “We believe that lending rate cuts, rather than reforms, hold the key to an immediate cyclical recovery by say, end-2015. Reforms will support growth only over, say, 5 years and so, it does not really matter where they are legislated in this parliamentary session or next,” in the report.

Corporate results: Though overall turnaround is expected around September onwards, analysts at BofA-ML expect Sensex profit growth to recover to about 4 per cent in the June quarter from -0.1 per cent in March on standalone basis.

FOMC meet: “Despite improving data, the bond market is pricing in only about a one-in-five chance of a rate hike in September,” BofA-ML says. The reports also suggests, the US Federal Reserve (US Fed) could give clues to the possibility of a hike in interest rates in the upcoming policy meet on 28/29 July.